Some thoughts on multi-member electorates

Because I was thinking about multi-member electorates, I couldn't help but jot down a few responses to common objections. This is not my first rodeo with off-the-cuff electoral reform proposals (local copy); hey, someone's got to be interested in voting systems! 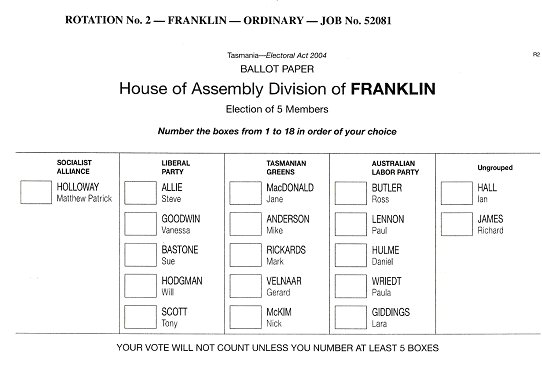 (1) By reducing the percentage of votes required to win a seat in parliament, the government will become less stable.

Having multi-member electorates would pull us towards a more representative system, but runs the 'risk' of requiring more coalitions: just as frequently happens in Tasmania where both Labor/Greens and Liberal/Greens have formed functional coalitions. Of course, there is the possibility that the coalitions are unstable or unworkable; some countries (e.g. Italy, Israel) are notorious for having chaotic governance because coalition partners can and do easily drop support for the government, or simply end up not being able to form a government in the first place.

If you truly do value stability over representativeness, then one should embrace it properly: realise that the reason our system 'works' in this way is that only 40% or less of the primary vote is required to form government, and simply endorse this. That is, allow the largest block in parliament over a threshold to form government, and weight votes in that coalition appropriately so that they can still govern despite representing less than 50% of the populace.

But better - not just because the above is distasteful, but I suspect would require consitutional change in Australia - is to encourage a system where dysfunctional governments are penalised. I'd simply bar any member of a collapsed coalition from office for five years, which should appropriately incentivise politicians to get along except in the most desperate circumstances. If the whole parliament was unable to form a coalition, they could all take a break.

(2) If we have five members per electorate, we'll either have many more politicians or make electorates cover far too many people.

If five person multi-member electorates were introduced Australia wide - assuming we don't want to dramatically increase the number of elected representatives, as this would increase the cost of government and make collaboration between parliamentarians more unwieldy and less personal - we'd likely increase the number of electors from ~100,000 to ~500,000. To take the case of Tasmania above, we'd end up with a single electorate for the entire state as the five federal electorates were combined.

However, in terms of ratio of electors to representatives, I believe that this problem is not as severe as it appears: due to population growth, we've moved from under 10,000 votes in an electorate to around 100,000, so we've long passed the point where a representative is likely to be personally known to a large proportion of electors. True, because of the relatively sparsely populated interior of Australia some electorates would cover quite disparate populations, but in such situations a significant localised issue could be enough to elect independent candidates on relatively low first preference votes (cf Kristie Johnson's election in 2021, with 11% before preference distribution).

In short, it's unfortunate that district magnitude would increase, but it's worth the trade-off.

(3) This is just too complex for people to easily understand.

This system is very similar to the existing senate system, and because Australians are used to allocating preferences there should be limited practical difference (aside from an increase in ballot size). Ballot papers could also be structured to minimise the complexity. And even Tasmanians and Canberrans seem to cope.

Interestingly, NSW apparently used multi-member electorates in the 1920s and abandoned it, supposedly due to it being difficult to administer; unfortunately, as an inexpert browser of the NSW Parliament Hansard and past newspapers, I haven't yet hunted down exactly why it was abandoned. A missed opportunity, from my perspective, as once you have a well established two-party system it's very hard to convince those parties to let in anyone else, even in the interest of democracy (misaligned incentives...). Perhaps a future blog post.